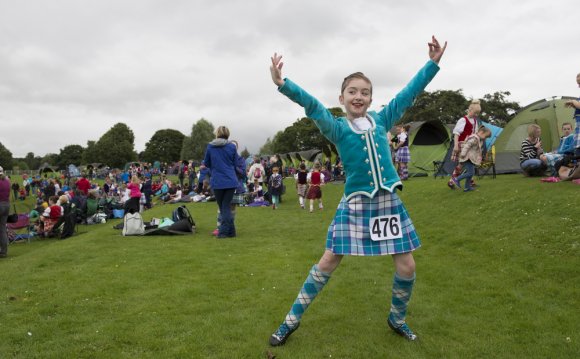 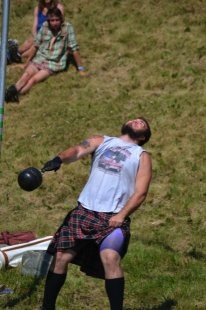 Cabers flew and bagpipes blew as the Kachemak Bay Celtic Club hosted its annual Highland Games and Gathering of the Clans at Karen Hornaday Park on Saturday. And, while the athletes and spectators would be hard -pressed to find much of anything wrong with the day of summer sunshine and bright blue skies, the 70-degree Alaska heat apparently made for a little wilting in the kilting.
“I was pleased with the overall day and of course, the weather was near perfect, ” said games organizer and club director Renee Krause, “But really, it was almost too hot.”
This year’s competition heated up a bit as well, as more competitors took to the fields in the Club’s third-annual games.
“We are getting more interested athletes from the Anchorage and Valley areas, which is fantastic, ” Krause said. “It takes a bit of commitment from them — especially to travel down to Homer. But if they get good enough and move up in ranking, just about every major city and town in the Lower 48 and Canada offers more opportunity for competition.”
Krause said athletes who are really determined can make it to Scotland, where the games last a week and feature more than 3, 500 athletes.
The Kachemak games were scored with the one-point method, where the total points accumulated throughout the competition are added together, and the competitor with the fewest points is declared the winner.
In the Amateur A division, Jody Potosky took the top spot with 10 games points, while Mark Eppihimer earned 17. Potosky dominated most events, out-throwing Eppihimer in the hammer throws. Potosky threw the heavy hammer 84-feet, 5.75 inches, while Eppihimer threw for 69-feet, 6.5 inches. Potosky’s throw of 108 feet in the light hammer bested Eppihimer by nearly 30 feet.
In the Amateur B division, Justin Moore finished first with 35 points, followed by Timothy Dommek with 42. Dommek out-tossed Moore in several throwing events, including the heavy and light weights for distance and the heavy and light hammers, but Moore’s impressive 25-foot toss in the 16-pound sheaf put Dommek out of the running for the top spot.
Daniel Werth was the only competitor in the Amateur C division, but turned in scores that were similar to several competitors in the higher division.
Ivan Wolfe was the winner of the Masters 40-49 category, throwing the light hammer 80-feet, 9.75 inches to best overall second-place finisher Dave Rasmesson’s throw of 69-feet, 3.5 inches.
In the Novice division, Jeremy Guest finished first with 21.5 points, followed closed by Ian McCormick with 23.5 points. The two competitors remained fairly even throughout much of the contest, with McCormick besting Guest in the light weight for distance, the heavy and light hammers, the 16-pound sheaf and the weight-for-height event. Guest’s performances in the braemer and open stones gave him the win.
“Ian did very well this year, taking second place in his category, ” Krause said. “He was very proud of his accomplishment, and rightly so.”
Krause also noted that her son, Cody, a novice second-year competitor, was the only one in his ranking — and one of very few competitors in the entire games — to throw a perfect caber. He finished fourth overall in his division.
In women’s competition, Sylvia Whipple dominated the boards with a 15-point first-place finish. Whipples’s next closest competitor was Jessie Duke with 24.5 points. Duke out-threw Whipple in the braemer stone, open stone, light weight-for-distance and heavy hammer, but was unable to compete in the caber toss. Whipple also threw the 10-pound sheaf a full 6.5 feet higher than Duke to secure the win.
Full results from the Kachemak Bay games are available on the North American Scottish Games Athletics website at in the databases, under the 2014 results for the Kachemak Bay Scottish Highland Games and Celtic Festival, Homer, AK, 7/5/2014 listing in the drop-down menu.

Posted by Tribune Moderator on Jul 8th, 2014 and filed under . You can follow any responses to this entry through the RSS 2.0.